When, a few weeks ago, commenting on Il pirata, we wrote that it is a ‘borderline’ work, halfway between two eras, we did not yet know that immediately afterwards we would be writing about another work which, albeit in a slightly different sense, can be defined as ‘borderline’ as well. Salome, Strauss’s third opera (after the flop of Guntram in 1894 and the tepid success of Feuersnot seven years later) also marks the transition between two centuries. If we keep in mind that Salome, performed for the first time in 1905, is only five years ‘younger’ than Tosca, we undoubtedly find ourselves looking at two different worlds.

Although Puccini’s works already reveal elements of innovation (even more so in the later works, up to Turandot), compared to nineteenth-century opera, Tosca is still a work linked to an idea of music, and especially of singing, based mainly on the melody, on the ‘cantability’, with a writing that preserves the classic ‘pezzi chiusi’, only expressed in a slightly different and “unorthodox” way, almost totally giving up the traditional ‘recitative-aria-cabaletta’ scheme, anyway already abandoned by the latest Verdi.

Unlike the two previous works by the same author, Salome was an immediate success. Based on the play of the same name by Oscar Wilde, the opera, in a single act, almost literally follows the German translation by the writer Hedwig Lachmann, used for a performance starring the legendary Sarah Bernhardt, which Strauss attended. The composition engaged the musician from the beginning of 1902 to the middle of 1905, when it was performed in Dresden.

The current production of La Scala should have been staged in March 2020, under Damiano Michieletto’s direction, but it was postponed due to the pandemic. Now it returns, broadcast by RAI, obviously without an audience and with the orchestra placed in the stalls.

The staging has been partially reworked to adapt it to the distance and the needs of television shooting. According to an interview with the director, one of the main differences consists in the fact that the hole from which Jochanaan emerges is no longer surrounded by flames, as was his original idea, but somehow ‘garrisoned’ by six winged figures, which in the interview he simply calls ‘dancers’, but who apparently represent some sort of ‘angels of death’.

And it is precisely from the vantage point of the direction that we must start to talk about this production because, obviously, we are witnessing the nowadays’ usual distortion inflicted by the ‘producer’. And, knowing Damiano Michieletto well from extensive experience, it was far too easy to predict that he would invent a story of his own, to substitute for Strauss’ Salome.

First of all, the action is shifted to a generically ‘contemporary’ time, at least judging by the clothes. As Michieletto himself stated in the short interview that preceded the RAI broadcast, his idea of the plot is that it’s a story of ‘family dynamics’, at the origin of which is the suspicious death of Herodes Philippus, a good family man, loving father of Salome and brother of the current tetrarch, who married his ambitious widow, Herodias. This, of course, is the director’s personal invention. In our opinion, it is sort of a minimising, a downgrading of the story, which, in its essence, is about the sometimes-perverse intertwining of love and death, in a framework of lust, power and depravity. A personal, simplified director’s view that ends up approaching – we do not know to what extent voluntarily – the plot of the next Strauss opera, Elektra, actually dominated by complex and wild family dynamics.

We actually see the ‘flashback’ of Salome, as a child, lovingly put to bed by her father, who also gives her a doll. And when, subsequently a sort of sarcophagus belonging to Herodes Philippus emerged (for whatever reasons…) from the hole, we almost expected to see Salome pull the axe out from under the floor… before remembering that we were watching another opera!

Such a subjective interpretation, aggravated by an infinite series of abstruse symbolism – such as the rain of large black feathers, which apparently stings or scorches, because those affected tear their clothes and roll around the stage in the throes of evident suffering – not only seriously jeopardises the understanding of the story by novice spectators, but in our opinion, also negatively influences the enjoyment of music.

Direction is not neutral with respect to music. If the music describes one situation and something else happens, music and stage contradict each other. This is particularly evident in the ‘Dance of the seven veils’. What we know as a sometimes sensual, sometimes savage seduction scene, described by music with exceptional effectiveness, here becomes something totally different … leaving us uncertain whether it is a present act, or another Salome flashback. The scene (from which Herodes is physically absent), however far from representing an act of seduction by Salome, instead depicts her rape by six men wearing the same mask as Herodes (in our opinion extraordinarily similar to the famous golden mask of Agamemnon… which brings us back to the juxtaposition with Elektra). And it was at that point that, at least for us, listening to music became very difficult, since the violent contradiction between what the music described and the scene before our eyes was an almost insuperable distraction.

But staging, in our opinion, also interferes with singing, since if a singer is placed in disadvantaged conditions, or sings one thing and does another, this, too, causes contradiction. It is no coincidence that the best part of the opera was the finale where one could finally concentrate on the protagonist, and – although the macabre detail of the severed head was missing – the text and the music finally reunited.

We are forced to leave out an endless number of minor details, such as the handmaid of Herodias, who becomes a kind of omnipresent elderly ‘nurse’ or protector of Salome, or Nabarroth, head of the guards, inexplicably transformed into a kind of clerk in rather shabby street clothes and wearing glasses, who often nervously swallows some pills, with which he ends up poisoning himself (instead of stabbing… but who cares? Not the director, that’s for sure). Last, but not least, Salome tries to strangle her mother with a rope (possibly used to kill Philippus… another reference to Elektra?) and, in the end, we do not know if she is killed, because when Herodes shouts ‘Kill that woman’, the curtain closes and the performance ends. Also, we cannot deprive our readers of details such as the huge black moon swinging like a pendulum or the dead lamb with which Jochanaan comes out of the hole (full of dirt). An endless series of ‘symbols’ that would require a handbook to understand… which the director probably wrote but undoubtedly does not add anything (indeed, detracts!) to Strauss’ work.

In these conditions, the singers do their best, which in the case of the protagonist is of great value. An excellent actress and a singer gifted with a beautiful voice and a confident technique, soprano Elena Stikhina is an artist who manages to move us, even in such an absurd context. Less convincing is baritone Wolfgang Koch, a prophet with a voice perhaps not thunderous enough for Jochanaan and penalised by the lack of the physique du rôle, accentuated, rather than suitably minified, by costume and makeup. Gerhard Siegel is a far too much of a shouting Herodes, but perhaps this is how the director wanted him, and therefore not the singer’s responsibility. Linda Watson, as Herodias, is suitably tough and superb. As for Attilio Glaser, as Nabarroth, the director portrays him as anything but a warrior. Though penalised by having to play such an arbitrarily attributed figure, he sings his part with great correctness, as do all the performers of the minor roles, struggling with far-from-easy vocal writing.

As for the conductor Riccardo Chailly and his long-awaited debut in this opera, our listening was, as we have said, too much influenced by the distractions imposed by the staging, so we might not do him full justice. Anyway, we heard a strong, tense, sometimes almost harsh reading, as is the music of Strauss, but with the appropriate, subtle moments of abandon and sensuality, perfectly supported by the La Scala orchestra, although scattered throughout the stalls emptied of armchairs, with the imaginable consequences on the ‘fusion’ of sounds.

We like to get in touch with our readers. Please add a comment under this article and/or rate the article with 1 to 5 stars. Scroll down. 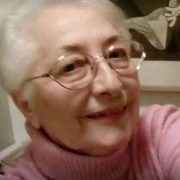 Here in Amsterdam, we had Damiano Michielletto’s Rigoletto (music by Verdi) Flashback also there: Happy childhood of Gilda, doll, teddybear. And lots of nonsense.It was all about a too possessing father and his reluctant daughter, as far as I remember.
And now this Salome. Same kind of nonsense.

Same here, Rigoletto at the Circo Massimo in Rome… Possessive father, rebel daughter… mafia Duke. And while singing “Piangi, fanciulla etc.” Rigoletto was putting in two bags the Duke’s gift to Gilda (mainly luxury clothes…) and loading them in his old Mercedes… Sheer madness.Obviously welcomed as a masterpiece by the press.