From the 18th to 27th January 2022, the Opera Theatre in Rome presents Janacek’s Kát’a Kabanová , conducted by David Robertson, directed by Richard Jones, with:

After presenting the highly acclaimed Tosca, the Opera Theatre in Rome stages an authentic rarity: Kát’a Kabanová, opera in three acts by Leoš Janáček. This is  an absolute premiere in Rome. Despite having composed numerous operas, Jenůfa was the only one by the Czech composer previously performed (in 1952 and 1976).

Presented in co-production with the Royal Opera House Covent Garden, this choice confirms the excellent program of the Roman Theater, which alternates famous titles with others less known, but nevertheless valid selections. This is certainly the case with Kát’a Kabanová, outstanding opera by a composer who is still too little performed. The difficulty of the language can only partially justify this long-standing absence. But in our opinion it is rather to be attributed to an historical cultural closure reserved to the entire Czech opera production, including the well-known composers Smetana and Dvořák (out of their entire opera production only The Bartered Bride and Rusalka are occasionally performed outside of the Czech Republic).

The story is taken from the play Groza (The Storm) by Ostrovskij, which inspired many other authors, including Tchaikovsky who composed the homonymous Ouverture.

The storm mentioned in the title is only the background to the tragic story of the main character, who oppressed by the terrible mother-in-law Kabanicha and neglected by her husband, will seek in vain a light of hope in a forbidden love.

The libretto with prose verses, edited in part by Janáček himself, perfectly reflects the peculiar composing style of the composer as it alternates different rhythms, which are adapted to the different characters in an effort to reproduce their individual “way of speaking”.

From a musical point of view, in fact, all of the scenes are built on numerous short episodes latching onto a few recurring elements.

Particular emphasis is given to popular themes (of which Janáček was a profound connoisseur) with their typical pentatonic configurations. There are also echoes and suggestions of other composers, from Smetana and Dvořák, to Mussorgsky and even Puccini, the imprint however unequivocally being that of the great Czech composer, with his “ostinato”, irregular rhythms, and so on.

The edition proposed on this occasion is the one edited by Sir Charles Mackerras, who tried to restore the original music sheet by eliminating changes made by other authors, commonly used in the first performances.

As in other Janáček’s operas, the orchestra is the engine from which the musical flow develops, and therefore the role of conductor David Robertson was particularly important. The colorful orchestral sound was well performed and not ostentatious. The special arrangement of the orchestra partly located on the side stage contributes to accentuating the feeling of spatial dimension, with the sound of timbre-rich instruments such as xylophones, bells etc. The orchestra played mostly as a chamber-like ensemble, and supported the singing in an extremely natural way. Perhaps a more emphatic character was missing in the most dramatic moments, but overall the performance was very good.

Despite the obvious challenges posed by a difficult language, all the singers gave an excellent performance. The undisputed star was as expected the American soprano Corinne Winters. Her Kat’a appeared fragile, dreamy, but also passionate and resolute, all characteristics found in her intense vocal and acting skills. The soprano also easily delivered the numerous low notes abundant in her role.

Absolutely convincing was also the alto Susan Bickley (Kabanicha), with an authoritarian voice perfectly suited to the character, and the mezzo-soprano Carolyn Sproule (Varvara), with a warm voice and a fascinating presence.

The numerous tenors present in the opera were also very good, from Charles Workman in the role of Kat’a’s ephemeral lover, with a lyrical and, when required, powerful voice, to Sam Furness as Varvara ‘s lover, with a nostalgic and dreamy singing, up to Julian Hubbard as the insipid husband.

The remaining singers, the bass Stephen Richardson (Savël Dikoj), the baritone Lukáš Zeman ( Kuligin ), the only Czech singer, and the Italians Angela Schisano and Sara Rocchi in their very short roles, were also excellent.

The sporadic interventions of the choir (led by Roberto Gabbiani as usual) were also perfect, and they were used more in a choreographic key, as it will be clearer in the next paragraphs.

The staging curated by director Richard Jones presented several problematic aspects. The acting of the individual characters appeared well calibrated, responding to the needs of the drama. However, the choreography, which mostly created confusion and disturbed the play, and the scenography were disappointing.

According to the typical cliché of the Regietheater, the story has been adapted from its original era (around 1860) to the present day, in a useless effort to make a drama, already containing a universal element, more modern.  In reality, this might be tolerated, despite some inevitable anachronisms, such as the discussion about lightning rods in the third act. Nevertheless, the director failed to avoid some commonplace clichés, first of all the terror of nature, a sort of prohibition on showing scenes containing natural elements. Thus, if on the one hand a hyper-realistic (modern) scene of the interior of the Kabanov house was shown, on the other there was no trace of the Volga River, its banks, the garden and any other natural element. Their presence was replaced by a huge room with completely empty walls and with six side doors, from which passersby continually entered and exited. In short, a scene designed to go beyond the “banal descriptivism of the landscape”, but not beyond the now banal cliché of empty stage space.

The other typical cliché present in this production is what we could call the terror of inactivity, a sort of fear that the audience might get bored because “nothing happens” on the stage. Hence, in the prelude, interludes and in the more static moments, the director decided to “do something”, mainly introducing (unrequired) mass movements. This explains the continuous entries and exits of passers-by, which in some cases have suddenly generated a sort of human wave, perhaps simulating the vortexes of the Volga in a sort of great round dance, only to disappear just as quickly. The opposite situation was certainly more effective: at the moment of Kat’a ‘s meeting with Boris, all movements freeze, time appears suspended, although this is anything but an original solution. There is no doubt that the choreography (curated by Sarah Faje) required a great choral effort, but the result according to the writer was more than anything else that of unnecessarily disturbing the development of the opera.

In the end the audience warmly applauded a musically excellent performance, which will hopefully encourage for the staging of other Czech opera masterpieces. 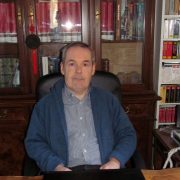 Physicist, professor at Salerno’s University. Opera fan for more than fifty years, with special interest for Russian, Czech, and in general less performed operas. Strongly believes that Great Art doesn’t need updates, and that operas work perfectly just as they were originally conceived.

Vladimir Stoyanov: "Opera is a casket of beauty."